Sleep training is a hot-button topic with opinions ranging from “It changed my life” to “It’s child abuse“. While sleep training is not the right choice for every family, it is a valid & safe choice for families looking for sleep change.

I always approach things from an evidence-based, research-backed perspective, so my approach to sleep is no different. While the choice of whether or not to sleep train is deeply personal & family specific, here is what the research tells us.

Claims againt sleep training are based on missused evidence

Many of the concerns about sleep training come from the fact that there often is a certain amount of crying involved. While unpleasant, this is to be expected when changing habits around sleep. Babies are human after all, and it is unfair to expect them not to express their protest when things change. While there are a lot of things parents can do to support their child in learning a new skill, it is unreasonable to expect to be able to control the amount and degree to which children will express themselves during the process.

Concerns about crying being harmful really began in 1993 when Dr. William Sears introduced the concept of Attachment Parenting. Attachment Parenting warned against sleep training citing that prolonged crying causes brain damage and trust issues. Once Sears’ book was published, a generation of new parents began to cling to the idea that sleep training was ineffective and dangerous.

This claim is certainly frightening when taken at face value, especially because it appears as though Dr. Sears has evidence to support his theories. However, a deeper dive into the research shows that the information Sears is basing his theories on is full of its own issues.

The data from the studies used to support Dr. Sears’ claims comes from a small sample of babies who were exposed to chronic abuse & neglect and raised in orphanages without strong attachment figures (very much unlike the household in which you are raising your baby, I’m sure.)

In fact, the Yale researchers who conducted one of the studies Sears used to make his claims responded to Sears’ use of their results by saying, “Our paper is not referring to routine, brief stressful experiences but to abuse and neglect. It is a mis-citation of our work to support a non-scientifically justified idea.”

Let that sink in for a moment. Dr. Sears’ conclusions came from looking at the results of abuse & neglect. NOT the standard level of crying that can come from new experiences like sleep training.

Many arguments against sleep training are not based in empirical evidence and instead grossly misuse data from studies unrelated to sleep training to make their claims. When gathering information, it is imperative to assesss whether the source is a credible one and whether the evidence provided is data-driven vs. opinion.

In 2012, Dr. Anna Price a postdoctoral researcher at the Royal Children’s Hospital’s Centre for Community Child Health in Melbourne, Australia conducted an extensive study that followed a group of 226 children over the course of 5 years. Within the study, she measured mental health, sleep, stress regulation, parent-child relationship, maternal health, and parenting styles among the participants. She assigned 1/3 of the participants to a “sleep training” group, and then followed up with all of the families 5 years later to see if the children whose parents employed some type of sleep training method had experienced any damaging impacts.

The result…they had not. In fact, to quote the study, “There was no evidence of differences between intervention and control families for any outcome. Behavioral sleep techniques have no marked long-lasting effects.”

In March of 2016, the American journal Pediatrics published a peer-reviewed study that also showed sleep training to be both effective and safe.

Additionally, there is robust evidence to show the correlation between sleep and maternal mental health. In one study, 328 children were split into two groups: a “sleep training” group and a control group. When followed-up with two and four months later, the mothers in the “sleep training” group were less likely to be depressed and more likely to have better physical health overall.

Another study out of Sweden looked at the impact of sleep training on the attachment relationship, and found that infant security and attachment actually increased after sleep training (this was in addition to improvements in overall behavior and eating as well).

Suffice it to say, the evidence for sleep training exists, and the evidence against is often based on unrelated data or is entirely theoretical.

So the long-winded answer is, yes, sleep training is safe.

While it is not the right choice to every family & not every family will need to sleep train, if you are in an unsustainable sleep situation but nervous to make a change for fear of harming your child in some way, I hope this helps put your mind at ease.

Sleep training is a safe & valid option, and if you want a plan to do it in an intentional, effective, and most of all fair way, sleep coaching or Oh Baby Sleep Course can help! 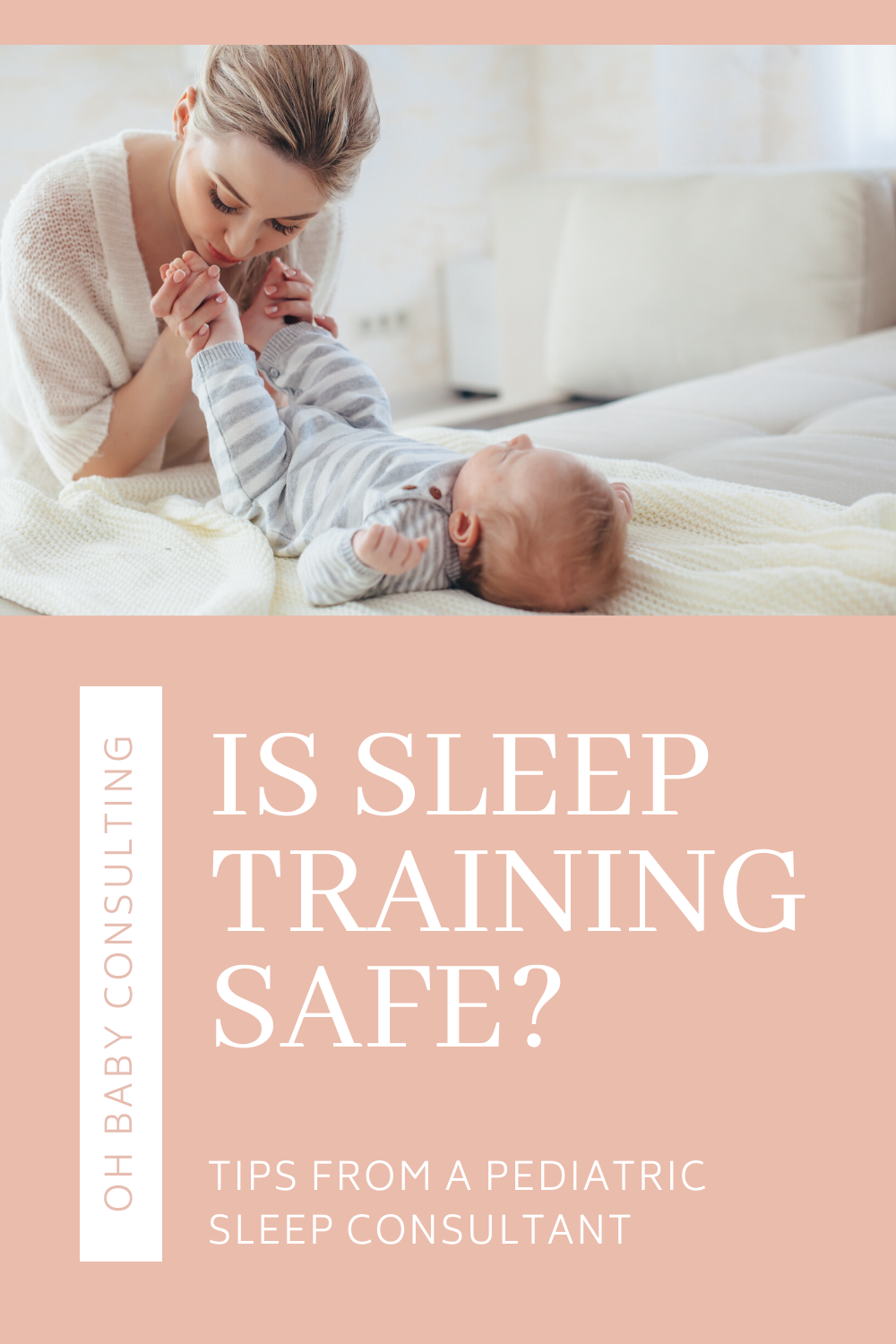 If you’re exhausted, totally overwhelmed by your child’s sleep habits, or looking for answers to the sleep questions that keep you up at night (literally), then you’ve come to the right place. I’m Jamie, founder of Oh Baby Consulting, and my goal is to help your family get the sleep you need to not just survive, but thrive!